Writing about blind musicians is a difficult matter. You want to praise them for their talents and struggles, but you don’t want to come off as patronizing. Let’s bust a myth. Contrary to popular belief, blind people do not have a better sense of hearing than sighted people or an innate gift for music.

However, a blind person does learn to rely on their hearing more than a sighted person does. Blind people are much like anyone else, with all their ups and downs. However, these ten piano players who happen to be blind are exceptionally gifted.

How Can Someone Blind Learn to Play the piano?

Some of the fascination behind blind piano players stems from the piano seeming a difficult instrument to play while blind. Sight is not necessary for piano playing. You may notice that sighted players don’t look much at what they’re doing. While Braille sheet music exists, it’s difficult to read it with one hand while playing piano with the other.

Reading music is not integral to learning to play the piano. Most blind pianists learn to play by ear. Watch a blind pianist closely, you may notice the fingers stay very close to the black keys. As black keys stand out more, a blind musician can feel them to get a better idea of where the proper keys are. 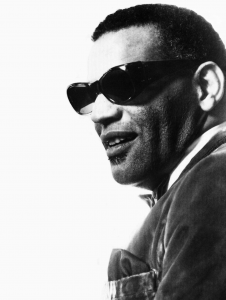 Pepsi’s been on a nostalgia kick so this man’s picture is now on their soda cans. Ray Charles Robinson showed an early aptitude for music, picking up a bit of “boogie woogie” from the owner of Red Wing Café. His blindness was rumored to be psychosomatic effects of watching his younger brother drown, but it was most likely cataracts.

Entirely blind by age seven, his mother sent him to Florida School for the Deaf and Blind in St. Augustine. He was taught classical piano using the Braille method, but Ray was drawn more to jazz and blues.

He released his first single “Confession Blues” in 1949 leading to more success on the R&B charts. He landed a deal with Atlantic Records in 1953. All through the 50’s, he garnered his nickname “The Genius” for his ability to perfect all different styles of music. Ray won his first Grammy in 1960 for “Georgia on My Mind”.

In 1965, Ray was arrested for heroin possession but avoided incarceration by agreeing to attend rehab in Los Angeles. His career made a big comeback in the 80’s after a cameo in the comedy The Blues Brothers. He died at age 73 from liver complications 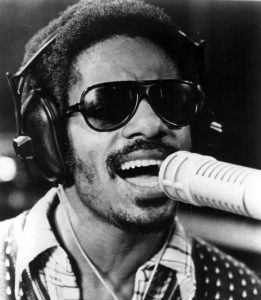 He’s been compared to Ray Charles, but doesn’t mind being compared to one of his idols. Stevland Hardaway Judkins was born prematurely with an eye disorder that was worsened by receiving too much oxygen in an incubator. He never let blindness stop him from playing rough with his brothers or exploring his love of music. He took up singing, drums, piano and harmonica.

He got his first record deal at age 11 with Motown, where Berry Gordy Jr. gave him the stage name “Little Stevie Wonder”. In the 60’s, Stevie dropped the “Little” but has continued to live up to the name “Wonder”

Though Stevie has won Grammies and Oscars among other awards, his proudest accomplishment was getting Martin Luther King’s birthday recognized as a national holiday. His advice is “You can deal with most anything that comes your way with the right attitude.” 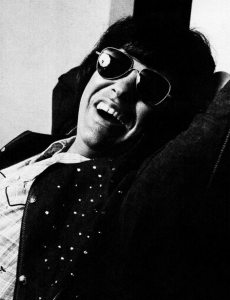 If the previous paragraphs on Ray Charles seem a bit long, it’s because he was the one who influenced many of the other musicians in this article. Ronnie Milsap is among them. Ronnie, almost totally blind from birth, was raised by grandparents who sent him to Governor Morehead School for the Blind in Raleigh, NC at age five.

It was here he developed a talent for music, mastering the piano. He was going to study law, but the attention he got at the Royal Peacock Club influenced him to pursue music full time.

Ronnie’s career took off in 1965 with him signing on with Scepter Records and making it to the R&B charts with the single “Never Had It So Good”. In 1973, he delved more into country music and signed with RCA Records. Ronnie has a versatile range, able to sing in a variety of styles. 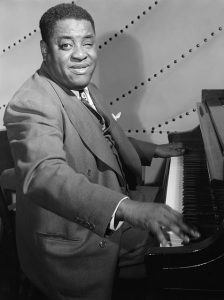 When other jazz artists talk about who the best jazz pianist of all time was, the general consensus bows to Art Tatum. Arthur Tatum Jr., visually impaired from birth, was taught piano by his mother. Art showed a rare gift of perfect pitch early on.

At 16, he attended Columbus School for the Blind where he honed his musical talents and learned Braille. A few years later, he was playing piano for Toledo radio station WSPD and the local Waiters’ and Bellmens’ Club. He was greatly renowned for playing at fast tempos, with seemingly no effort.

According to jazz critic Gary Giddins “If you don’t like his ornament, you should be listening to someone else.” In 1993, MIT student J. A. Bilmes coined the computational music term “Tatum” to refer to “the smallest perceptual time unit in music”

Moondog was a most eccentric musician, often found hanging around 6th Street in Manhattan, dressed like a Viking. Being the fan of Nordic Mythology, it is possible Moondog knew the myth of Odin trading an eye for wisdom.

Born Louis Thomas Hardin in Marysville, KS, Moondog played drums in the school band until blinded by a farm accident at 16. Moondog moved around afterwards, studying music at various schools and training his ear. He came to New York in the 40’s as an avant-garde street musician.

Moondog blended various styles such as jazz, classical, Native American and random street noise. Moondog’s brand of music was so unique, he had to invent new instruments to play it. Moondog died of heart failure at age 83 in Munster, Germany.

The 29 year old piano prodigy, Nobuyuki Tsuji, was born blind in Tokyo, Japan. He was only 2 years old when he played “Do Re Mi” on a toy piano after hearing his mother hum the tune. At age 7, he won first place at the All Japan Music of Blind Students by the Tokyo Helen Keller Association.

At age 10, he debuted with the Century Orchestra, Osaka. He spent most of his childhood traveling the world and performing, pausing in 2007 to attend Ueno Gakuen University. Nobu-Kun plays by ear, but uses Braille to compose original pieces. 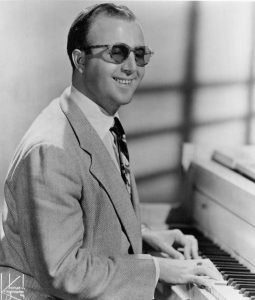 When George Shearing was knighted in 2007, his comment was “Now that’s a fairy tale come true.” He was born blind to working class parents in London, England. The piano prodigy studied at Linden Lodge School for the Blind. At 18, he made his first recording with Leonard Feather for the BBC.

In the late 1940’s George came to America where his brand of bop and swing caught on, leading to him composing the jazz standard “Lullaby of Birdland”. George would collaborate with many and spent half the year in New York and the other half in Gloucestershire.

Besides his knighthood, George won two Grammies, three honorary doctorates in music and performed for three U.S. presidents. He died in New York City at age 91.

Joaquín Rodrigo Vidre, 1st Marquis of the Gardens of Aranjuez was best known for popularizing the Spanish guitar as a universal concert instrument, but his real gift was with the piano. He was born in Sagunto, Valencia, Spain and went blind at age 3 after a bout of diphtheria. He studied music both in Spain and Paris, mastering singing, composition, piano and violin.

Though he never quite mastered the guitar, he composed Concierto de Aranjuez for guitarist Regino Sainz. Joaquín was awarded the Premio Nacional de Musica in 1983. In 1991, he was raised to the title of Marquis by King Juan Carlos I. Joaquín died in Madrid at 97, his daughter Cecilia inheriting the title of Marquesa. 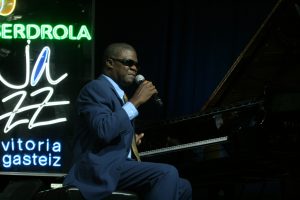 By Alberto Cabello Mayero [CC BY 2.0 (https://creativecommons.org/licenses/by/2.0)], via Wikimedia Commons

Like Ray Charles, Marthaniel “Marcus” Roberts studied at Florida School for the Deaf and Blind. Marcus has been blind since age five due to glaucoma and cataracts. He was largely self-taught on piano, having his first lesson at age 12. His style is jazz based with a heavy influence of soul and gospel marcus learned from his mother.

Marcus has won the Helen Keller Award for Personal Achievement and has accomplished much as a pianist composer and bandleader, but is most dedicated to teaching young people to develop their musical skills.

Kenneth Peter Medema has performed for more than forty years. He was born mostly blind but can distinguish light from shadow. He learned classical music through Braille, playing by ear and improvisation. He majored in music therapy at Michigan State.